“I would like u WMP to extend electricity 2 our village”: On Information Technology and Interest Articulation. (with Macartan Humphreys and Guy Grossman, published in the American Political Science Review)

How does access to information communication technology (ICT) affect who gets heard and what gets communicated to politicians? On the one hand, ICT can lower communication costs for poorer constituents; on the other, technological channels may be used disproportionately more by the already well connected. To assess the flattening effects of ICTs, we presented a representative sample of constituents in Uganda with an opportunity to send a text message to their representatives at one of three randomly assigned prices. Critically, and contrary to concerns that technological innovations benefit the privileged, we find evidence that ICT can lead to significant flattening: a greater share of marginalized populations use this channel compared to existing political communication channels. Price plays a more complex role. Subsidizing the full cost of messaging increases uptake by over 40%. Surprisingly however, subsidy-induced increases in uptake do not yield further flattening since free channels are not used at higher rates by more marginalized constituents.

Information Technology and Political Engagement: Mixed Evidence from Uganda (with Macartan Humphreys and Guy Grossman, revise and resubmit at Journal of Politics)

This study integrates three related field experiments to learn about how Information Communications Technology (ICT) innovations can affect who gets to communicate with politicians. We implemented a nationwide experiment in Uganda following a smaller-scale framed field experiment that showed that ICTs can lead to significant “flattening”: a greater share of marginalized populations used SMS-based communication compared to existing political communication channels. We find no evidence for such flattening from the national experiment, however. Instead patterns of participation look like politics as usual: participation rates are low and marginalized populations engage at especially low rates. We examine possible reasons for these differences, and then present the design and analysis of a third mechanism experiment that helps parse rival explanations for these divergent patterns. The evidence suggests that even when citizens have issues they want to raise, technological fixes to communication deficits can be easily undercut by structural weaknesses in political systems

This project uses an experiment to assess if MPs to respond to voter’s expressed policy preferences when these positions run counter to those of a dominant party. Working with the Civil Society Coalition to Stop Maternal, Newborn and Child Mortality in Uganda, I designed and implemented a randomized control trial of lobbying tactics, where the outcome was the willingness of MPs to support budget increases for health service provision.

Before the vote on the budget, I conducted polls that showed a majority of voters supported increases in health spending, and that they were not willing to re-elect representatives who did not act on this point. This information was distributed to some randomly assigned MPs and not others. All MPs were then asked to signal their on their willingness to support increases in health spending by signing a public petition.

MPs who were treated with voter public opinion were more likely to sign the public petition than untreated MPs, but did not vote any differently from MPs who did not receive voter pressure in Parliament. The budget for health was not increased. This result suggests MPs are willing to bow to voter pressure, but in limited and minimally consequential ways. 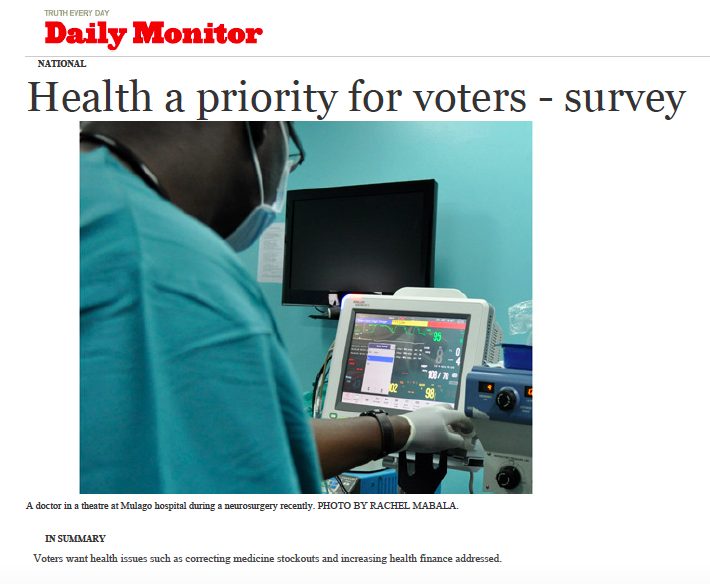